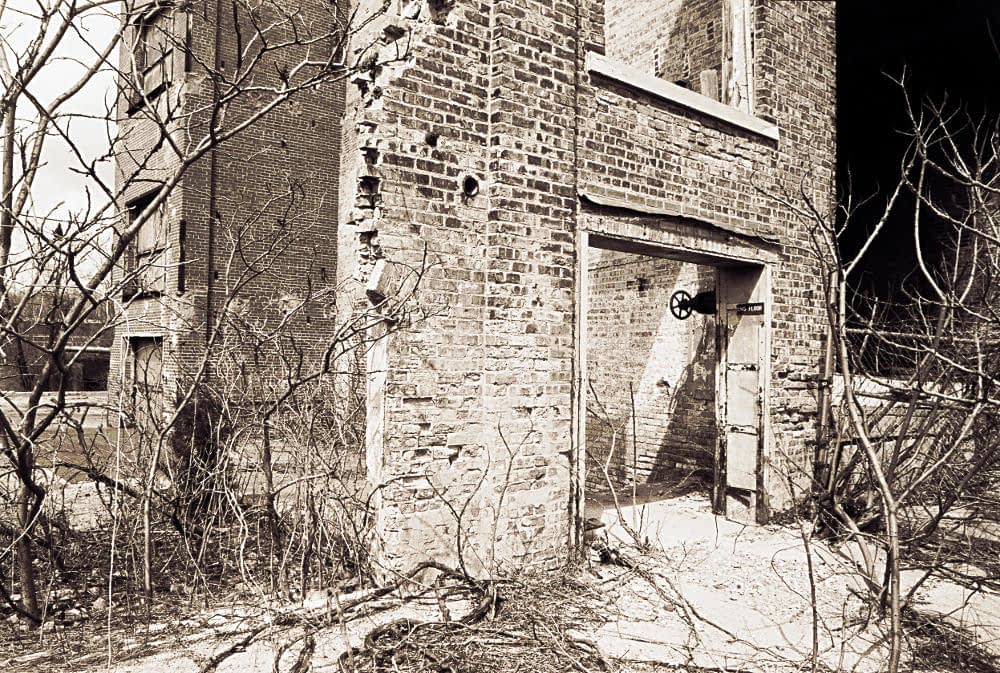 Crumbling walls of the Nabisco warehouse in Marseilles, IL. I photographed this same location years ago, but was unimpressed with the results. At the time, I saw nothing more than decay in a stagnant area – I focused on the progression of decrepitude and nothing else.

I’ve since moved to many areas where massive plots of land are sold without second thought for development, and I’ve grown tired of seeing land, plant-life, and existing buildings reduced to asphalt lots or fluorescent-flooded concrete boxes – differentiated by the unstoppable flood of vehicles, overabundance of branding, and accumulation of litter.

When I returned to this building in late March, 2013, I did so with a sense of fulfillment, not because of my improvements as a photographer, but because of a growing appreciation of this building and its history. While waiting for the sun, I contemplated a time when the door marked “2nd floor” didn’t lead to a sharp drop, when the entrance wasn’t lost in underbrush, and when being that far into the location wasn’t a deviant activity.

I only know the general history of this building, but I believe a crumbling façade and non-existent 2nd floor contribute more to the city’s character and identity than modern business architecture ever will. However imperfectly this building has weathered time and however little utility it has, it represents an era of opportunity, and affirms the city’s ability to provide for itself. In contrast, the best modern business architecture gives is temporary ownership, or a large sign that reads “for sale or lease”.