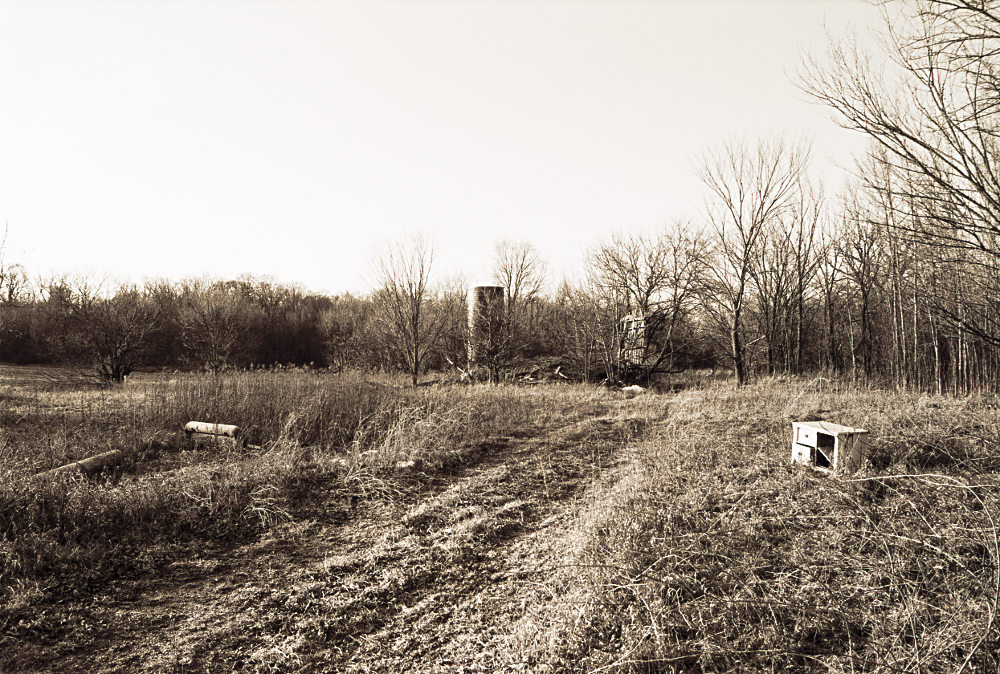 An abandoned lot sandwiched between the west-Chicago suburbs. This area, like many suburbs of northern Illinois, suffers an identity crisis brought by displacing traditional lifestyles with corporate servitude that masquerades as modernity. Around here, rural routes undergo continual construction to accommodate increased traffic. Big box stores, exchanged between corporations or used and left abandoned, dominate once-fertile farmland. Swarms of prefabricated homes with identically colored siding, a lack of windows, and faux upper-class architecture are jammed as close together as possible.

Worst, in my opinion, is the murky glow that disbands the night, and the cell towers, billboards, and transmission towers that add new stab wounds to the skyline.

The above culminates in stifled human spirit, which promotes the following to a state of normalcy: encapsulation, homogenization, intolerance, irrational righteousness, greed, and rampant consumerism. Spending as the solution to discontent echoes across any major road, whether in the form of generic billboards invoking one’s perception of privilege, marquees that proclaim the dull and underperforming as worthwhile, or sign holders who are made to accept an absence of dignity in any element. All the while, outside these suburbs, hand-painted plywood signs for hay and produce, farmhouses falling apart for an unconcerned highway audience, and tractors leading their own funeral processions whisper of what once was.

I hope to see these areas return to coexistence with nature and learn to place community above personal interests. I know, however, that for as long as cramming people into these nouveau company towns is profitable, such a change will not come easily, quickly, or painlessly.